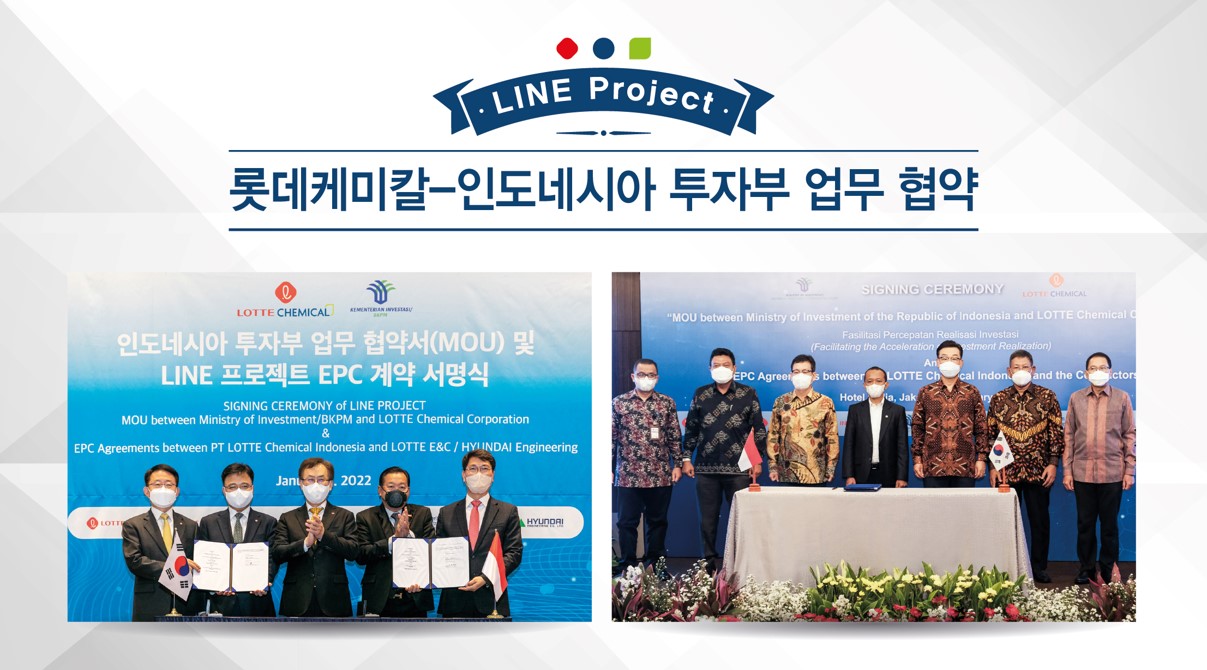 █ Invest a total of 3.9 billion USD in Indonesia for the ‘LINE Project’, which is a large-scale petrochemical complex construction project, with the goal of beginning

LOTTE Chemical (CEO and Vice Chairman Kim Gyo-hyun) finalized an MOU with the Indonesian government and selected constructors as it sets off to pursue the LINE Project in earnest.

The Indonesian government pledged various incentives such as lowering raw material import tariffs, exemption from import tariffs for various equipment and materials needed for construction of the plant, increase in tax benefits, etc. for the successful completion of the project and commercial production for LOTTE Chemical.

LINE Project is a massive petrochemical plant construction project in which LOTTE Chemical and its subsidiary LOTTE Chemical Titan will build in Banten, Indonesia with the goal of completing by 2025. It is expected to produce 1 million tons of ethylene, 520,000 tons of propylene (PL), 250,000 tons of polypropylene (Pp), and downstream products annually, and post sales of 2.06 billion USD (2.4 trillion KRW) every year.

LOTTE Chemical predicted the growth potential and increase in demand for petrochemical products in the Southeast Asian market early on and acquired Malaysia’s largest petrochemical company, Titan Chemical (currently LOTTE Chemical Titan), back in 2010. It then constructed a naphtha cracking center (NCC) in Indonesia, while pursuing the LINE Project to complete vertical systemization with the existing polyethylene (PE) plant to strengthen its market competitiveness.

This project involved the construction of the largest naphtha cracker in Indonesia, and it is expected to improve the trade deficit of Indonesia, which currently imports 50% of its total petrochemical product demand, while providing the foundation for the development of the local petrochemical industry.

Vice Chairman Kim Gyo-hyun stated, “The LINE Project is important because it will not only strengthen LOTTE Chemical’s global business competitiveness, but also lead to mutually strategic values such as the economic growth and job creation in Indonesia,” while adding, “I would like to express my gratitude to all stakeholders, and especially the central and local governments of Indonesia that made this project possible. I hope that this large-scale investment by LOTTE Chemical will proceed successfully based on continuous support, thereby being beneficial to the overall economy of Indonesia.”

Minister Bahlil Lahadalia of the Indonesian Ministry of Investment/Investment Coordinating Board (BKPM) commented, “We thank LOTTE Chemical for its investment, and once production begins through the LINE Project, we expect that there will not only be improvements to trade deficits by substituting imports, but also have a positive impact on all industries including petrochemicals in Indonesia.”