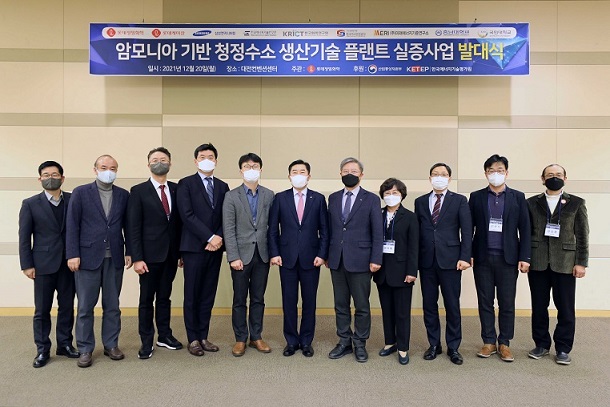 The consortium selected for the ‘Ammonia-based Clean Hydrogen Production Pilot Plant Demonstration’ project, which is an open national policy project designated by the Korea Energy Technology Evaluation and Planning under the MOTIE held its launching ceremony with the attendance of representatives from each organization and agency heads, etc. at the Daejeon Convention Center in the afternoon of the 20th.

This national policy project began in November 2021 and will go on for 48 months, and of the total 26.2 billion KRW budget, 14.8 billion will be paid by the government and 11.4 billion will be contributed by the consortium companies. Major contents of the project include LOTTE Fine Chemical constructing a substantiation plant that produces 800 tons of hydrogen annually based on ammonia at the Ulsan Plant and developing an annual 16,000-ton hydrogen production plant design package that is the level for commercialization, and other parties will do their part in R&D for realizing carbon neutrality for domestic companies to achieve the national greenhouse gas reduction goals (NDC).

This national policy project is on developing ammonia decomposed hydrogen extraction technologies and procuring relevant infrastructure, and it has great meaning in that it entails ammonia decomposition technology development and substantiation with the goal of the nation’s first commercialization.

Furthermore, by substantiating ammonia decomposition technologies, which are essential for global hydrogen distribution yet still at the research stage around the world, it is expected that it will help Korea procure platform technologies and contribute to the national hydrogen economy.

LOTTE Group Chemical Sector Representative and LOTTE Chemical CEO and Vice Chairman Kim Gyo-hyun stated, “Production of clean hydrogen through clean ammonia pyrolysis will be the most effective hydrogen supply method in the future,” and added, “We will pursue the development of domestic technologies through the nation’s best industry-academic-research collaboration, from which LOTTE Chemical will supply 30% of the domestic clean hydrogen demand, while manifesting an assertive hydrogen business road map through the organic cooperation within LOTTE Chemical companies.”

Kim Yong-seok, the CEO of LOTTE Fine Chemical that is the supervising institute of this project, commented, “LOTTE Fine Chemical is in charge of ammonia distribution at 24% for Northeast Asia and 70% domestically, and we have abundant experience in ammonia production, storage, distribution and utilization spanning across more than 50 years.” He further added, “As the undisputed top ammonia supplier of Korea, we will create a complete ammonia-hydrogen energy pathway that encompasses ammonia import-transportation-storage-pyrolysis at a single site for the first time in the world through this project.”

Samsung Engineering President and CEO Choi Sungan explained, “Partners holding the top expertise in their respective fields have teamed up for a meaningful project to promote the domestic hydrogen economy,” and added, “Using the technologies and knowhow of Samsung Engineering acquired through numerous medium and large-sized ammonia projects throughout the world, we will successfully complete this national policy project to become a leader in the clean ammonia and clean hydrogen sectors.”

Korea Institute of Energy Research President Kim Jong-nam stated, “The Korea Institute of Energy Research has led the development of life-cycle technologies using ammonia ranging from green ammonia synthesis and hydrogen extraction to combustion technologies, and we will cooperate with companies to manifest these technologies as soon as possible. Furthermore, we will fulfill our mission as a government-invested research institute to contribute to the technologies developed through this project to play a leading role in implementing overseas clean hydrogen by entering the global market, while contributing to the realization of the national carbon neutrality policies. “

Korea Research Institute of Chemical Technology President Yi Mihye said, “Our research institute has the world’s most efficient platform technologies for catalyst development, which is a core element for the ammonia decomposition process, and we will contribute to enhancing the national hydrogen industry competitiveness through localization of low-cost & high efficiency catalysts and procurement of technological licenses.”

Korea Gas Safety Corporation Director Yoon Bang-hyun commented, “The Korea Gas Safety Corporation developed five detailed standards (KGS Code) for hydrogen goods and hydrogen fuel facilities according to the Hydrogen Act and enacted in August of this year. We will pursue legislating safety standards appropriate for the domestic situation according to the distribution timeline so that there are no issues for the new ammonia-based hydrogen extraction equipment.”